In 2021, savvy companies want to switch to renewable energy. Doing so helps them to save money through tax deductions and establishes them as environmentally friendly companies.

But businesses often question whether or not the cost of using more environmentally friendly processes is worth it.

Well good news; switching to renewable energy can definitely be worth it! We’ll show you how you can get $18/MwH (megawatt an hour) while reducing your net carbon footprint.

How Do You Calculate Renewable Energy Cost? 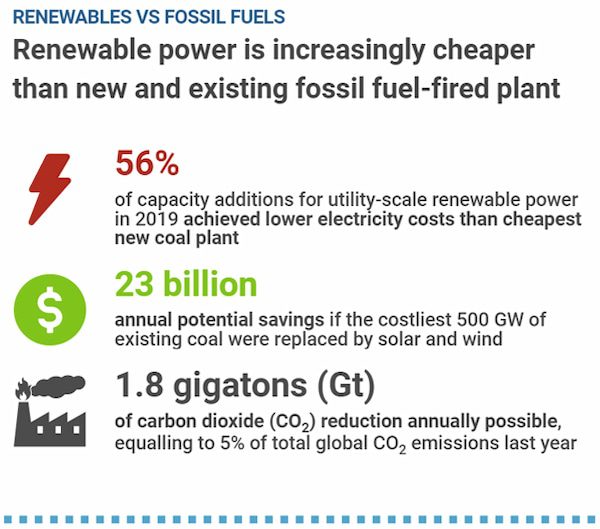 Most people know that renewable energy is our future, and think that it is overly expensive since the government is pouring in tax benefits for scaling renewable energy.

For pragmatists, the answer is, “whatever the cost, can we afford not to?” But what if it is cheaper than you actually think?

For the purpose of this article, we’ll discuss renewable energy in terms of megawatts and identify real life examples of the costs involved. What we uncover may surprise you, so keep reading!

The Cost Factors of Renewable Energy vs. Fossil Fuels:

A Side-by-Side Comparison One of the easiest ways to look at renewable energy costs is to compare it to something we are more familiar with: fossil fuels.

The International Renewable Energy Agency (IRENA) reported in 2019 that the energy produced from renewable sources was comparable in price to that of fossil fuels.

*It’s important to mention that these costs are worldwide averages and prices can vary wildly based on the specific scenario.

There are several costs that are associated with the cost of energy which we will quickly explore in this 10,000ft comparison.

While coal is at $102/MWh – on average, renewable energy costs in comparison are as follows:

At Powerphase our Fastlight storage-engine costs are lower than any of the renewable energy costs above. Fastlight comes in at just $18/MWh due to its hybrid combination of renewable powered compressed air.

Fastlight stores renewable energy in the form of compressed air and provides a firm, baseload renewable energy to the grid. When storage is depleted, the system also functions as an efficient peaker asset to deliver power as needed. 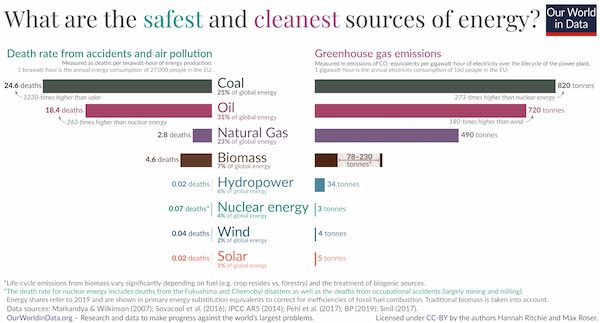 All of the renewable forms of energy are much safer than nonrenewable sources according to this illustration from “Our World in Data”. If we look at the top four we can see the death toll is very low in hydropower, wind, and solar, with nuclear energy only being slightly more harmful.

Lasting 30+ years, our FastLight Storage Engine technology is a long-term storage asset that diminishes the need for battery replacement and disposal. With superior durability and storage capacity, compressed air storage offers a more flexible and environmentally-friendly alternative to batteries at a fraction of the levelized cost of energy. Intermittency in the use of renewable energy can be a thing of the past with FastLight.

As you can see, renewable energy can in many cases be less expensive than nonrenewable renewable energy. It is also, on average, cleaner and safer than other energy sources. To save even more money, & reduce intermittency, we recommend our FastLight Storage Engine to get $18/MWh using compressed air.

To save even more money, & reduce intermittency, we recommend our FastLight Storage Engine to get $18/MWh using compressed air.