Energy storage methods are a hotly debated topic in the renewable power industry, particularly which solutions will help plants meet both their peaking and baseline needs.

From Compressed Air Energy Storage (CAES) to Battery Energy Storage Systems (BESS), experts from all sides are advocating for their technology to be the go-to form of energy storage.

While many renewable power plants have historically looked toward BESS to solve their baseload and peaking needs, the surge of new, more efficient CAES technology coupled with the advancement of international initiatives to reduce carbon output has many renewable plants asking themselves: “How can I improve energy storage that will reduce my overhead AND my carbon footprint?”

This balance of budget & clean energy can be achieved through compressed air energy storage.

In this article, we are going to dissect the main differences between these two prominent energy storage options and explore how Compressed Air Energy Storage (CAES) is able to provide significantly more value for your business (and the environment) than its Battery Energy Storage System (BESS) counterparts. 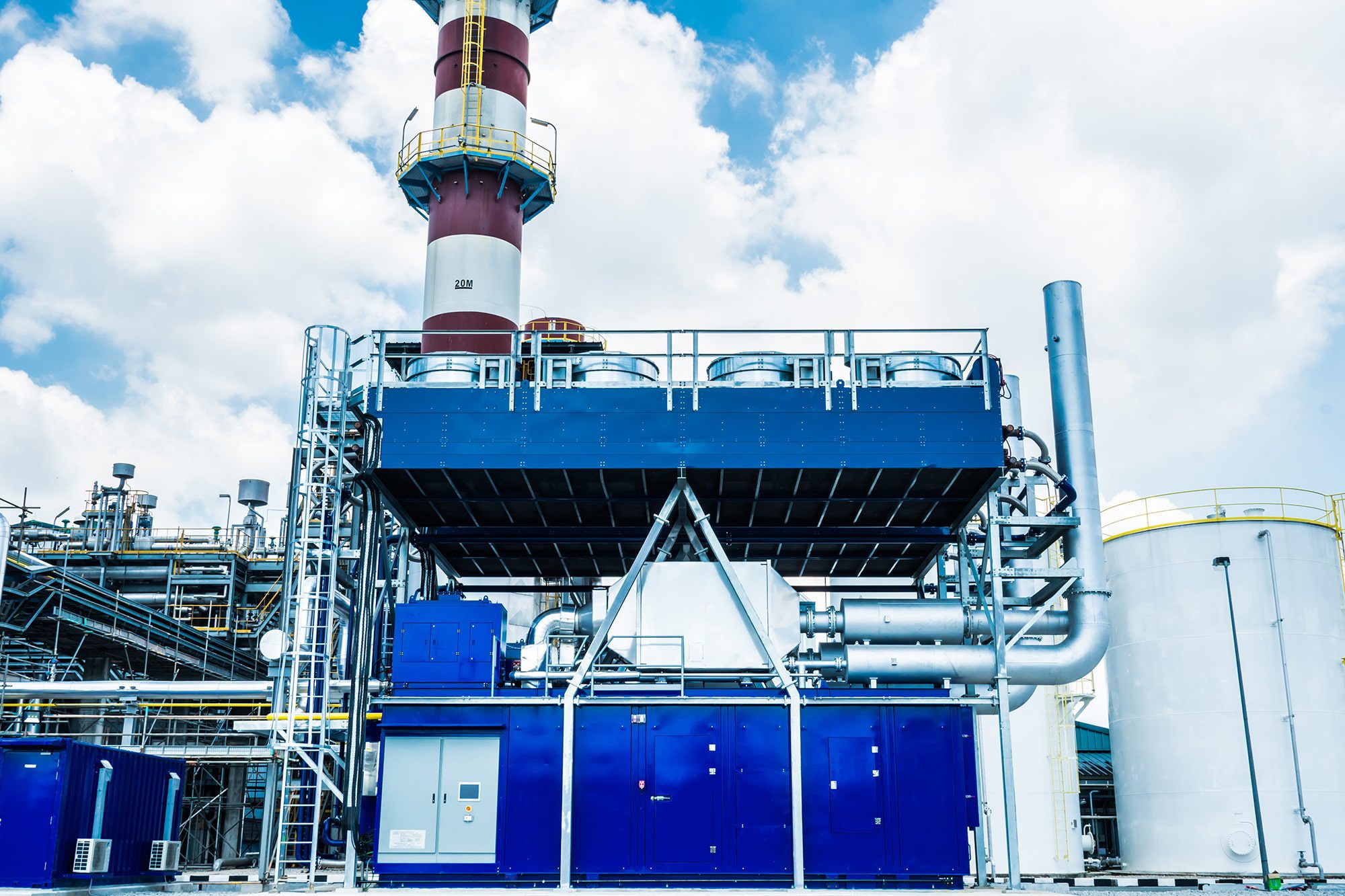 3 Problems Within the Space of BESS Technology

In fact, battery energy storage solutions are being used in place of “peaking” power plants, where the stored energy would only be harnessed when energy prices and demand were at their highest.

Today, there are multiple efforts across the world to create massive battery energy storage that go beyond this measure.

However, this may actually be a big mistake, as BESS is not a long-term solution for all renewable energy power plants.

Not only would the cost alone create hesitancy, but there are other factors to bear in mind such as short battery lifespans and costly replacements. Keep reading to understand the current problems facing BESS.

On average, the lifespan of a battery is 3-5 times less than that of a CAES system.

With most battery systems’ shelf lives hovering around 5 to 10 years, the ability of a battery to store energy tapers off dramatically and thus causes efficiency concerns.

According to a BESS study on IE Explore, the average lifespan of a battery is 8.31 years.

Capacity energy loss is affected by a number of factors, including:

The battery will lose its ability to store energy and will need to be entirely replaced, which is a costly and environmentally-hazardous endeavor, as there is currently no good solution for battery disposal.

Today, governments worldwide are providing massive financial incentives to develop this type of energy storage system, significantly driving down the cost of batteries. The current U.S. administration, for example, which has launched their Net-Zero America initiative, will invest hundreds of billions in battery-dependent sectors nationwide.

But there’s a catch: Once renewable plants opt for a BESS solution, they will then be responsible for the costly endeavor of continuously replacing and disposing of the batteries – a topic which is often ignored in the acquisition process.

Furthermore, there is no real guarantee that there will be government incentives 5-10 years out from now, given alternative technologies with far greater value propositions.

And if this was the case, power plants could very well be left on their own to pay the entire cost of battery replacements, which certainly would not be cost effective.

3. Potential Breakdown is a Major Concern

There is always the chance that batteries will overheat and even catch on fire. In energy storage, excess thermal energy going in or out of the battery can create a gas bottleneck, which can rupture the battery and lead to combustion.

Additionally, if one battery fails, this increases the risk of failures in other batteries all across the grid. The reality is that this could be the result of several factors, including battery design and the control systems at work.

Advanced battery energy storage systems, such as solid-state batteries, are years or even decades away from becoming commercially viable.

While the energy industry seems to dream that a new battery storage technology will hit the market at the perfect moment to save the day, this is optimistic thinking and batteries may not serve grid farming the way many had hoped.

Instead of BESS, compressed air energy storage (CAES) has the potential to solve peaking and baseline problems.

Instead of storing excess energy in a battery, CAES systems allow you to store surplus energy during low-demand hours in the form of compressed air. This creates a stream of clean energy that can be accessed on-demand, significantly lowering overall energy costs and cutting certain emissions in half.

And that’s not all. Let’s address all of the ways that CAES systems may, in fact, offer additional benefits over traditional battery storage.

Older CAES systems were once limited by location, as they stored compressed air underground, meaning significant setup and excavation overhead.

This is not the case with modern CAES systems. Take our FastLight Energy Storage, for example. This modular technology can be added directly onto an older gas turbine, transforming that combustion engine into an above-ground energy storage system that also works as a peaking asset. 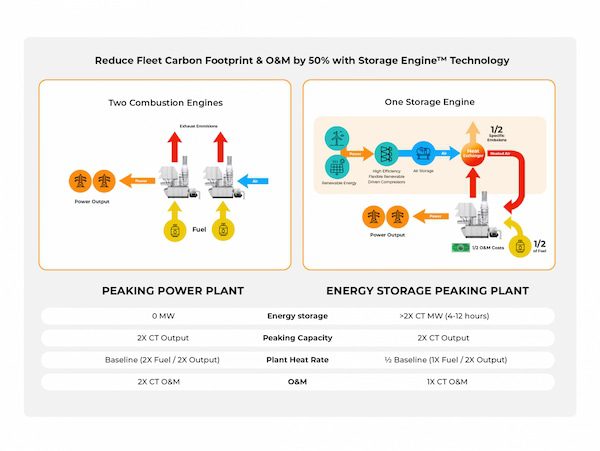 The easy site ability and cost-effectiveness of this system can be installed in nearly every power plant in the world, without cumbersome construction or overhead.

Compressed air energy storage typically has a much longer lifespan compared to battery energy storage. These systems can last as long as 30 years and don’t require any toxic disposal.

Furthermore, renewable energy can be stored in the compressed air energy storage for much longer units of time than a battery, from 4 hours to 4 days, greatly increasing the lifespan of the excess energy itself.

And now, unlike batteries, power plants can even lease modular CAES technology instead of purchasing the equipment outright – meaning less capital and faster return on investment. To learn more about how you can lease our CAES storage system, reach out to a member of our team.

Modern CAES systems have the ability to smooth peak energy by absorbing and storing energy when demand is lower. Later on, the system can turn around to be used to resupply energy during peak demand.

With that being said, CAES systems have the ability to both power up from shut-down conditions depending on the power grid’s needs and are able to reach capacity within minutes after starting up. 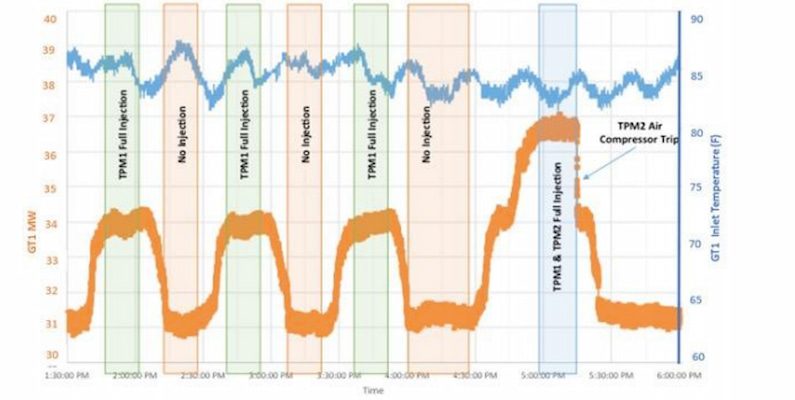 Even if batteries can store surplus energy for a short period of time, they do not provide the inertia to physically push the electrons down the transmission line, meaning they still require mass spinning generators to feed that stored energy to the grid, thus compromising output.

That’s why sophisticated CAES technology, like the FastLight Storage Engine, utilizes existing gas turbines to both store energy and deploy it back to the grid on-demand, solving for the problem of inertia and offering exponentially more output.

Renewable Power Plants Should Consider Their Next Investments Carefully

Modern power plants should carefully consider which energy storage method to invest in.

To learn more about how CAES systems can provide clean energy and a stable grid at a fraction of the cost, head to our Fastlight Energy Storage page and get a glimpse into our modern CAES model.