Powerphase collaborated with the Tamimi Group of Companies and Saudi Electricity Company (SEC) to demonstrate Turbophase system’s ability to boost F-class gas turbine (GT) power output at the high ambient air temperatures that Saudi Arabian summers are known for. Besides having hot summers, Saudi Arabian labor costs are high such that any technology that reduces plant downtime can help plant operators save a lot of money. Besides demonstrating the technical goals of boosting GT efficiency, the demonstration showed that Turbophase can be flexibly and quickly deployed to accommodate an accelerated schedule and unexpected conditions at the plant.

The project operated from mid-July to early October 2015. Two Turbophase modules were connected to a GE-MS7001FA-(7FA.03) GT at the Faras Power Plant in the Eastern Operating Area, to demonstrate performance and extrapolate the outcome to provide insight into how a full Turbophase system deployment would affect plant performance.

The project was approved in Spring 2015, with just 4 months to design, install, and commission the Turbophase demonstration. Powerphase adjusted its system with improvisations that would not be implemented in full deployment. First, instead of using a closed water cycle cooling system with a FIN-FAN cooler, Powerphase opted for an open cooling water cycle with two cooling towers that reduced the Turbophase module availability during the project. Second, instead of using electricity from the plant because a cable could not be readily procured and installed, Powerphase decided to use a diesel generator to power the Turbophase modules. The system was installed and commissioned by mid-June. It operated from mid-June to early October, with two performance tests to ascertain how the Turbophase modules were boosting GT power output and heat rate.

Over the course of the summer, despite the 12-hour cooldown periods required by the improvised cooling system, the Turbophase modules were over 97 percent available and enhanced the GT output by 3.2 GWh. As anticipated, due to the adjustments to accommodate an accelerated deployment schedule, Turbophase module availability was impacted by diesel supply, water supply, and the necessary 12-hour cooldown time associated with an open cooling water cycle that reduced operations to a 12-hour shift. The Turbophase modules would otherwise be available and operating 24 hours a day. Still, 12-hour availability is more cost effective than current options to increase GT output. One option is to install a chiller to cool inlet air, but the chilled water is only available for six hours because a chiller takes 16 to 18 hours to chill water. The other available option is to build a peaking GT plant, but this is time and capital intensive and still subject to inefficient power output at high ambient air temperatures.

In the Middle East, gas turbine efficiency at high ambient temperatures is crucial. Demand for fuel oil for power generation during a Saudi Arabian summer reaches between 420,000 and 430,000 barrels per day. With 58 percent of global use, the nation is the world’s largest user of crude oil for generating power. Iraq, Kuwait and the UAE were ranked third, fourth, and fifth, respectively; together with Saudi Arabia, these countries account for almost 80 percent of the crude oil that is burned for power generation worldwide. A 5% fuel efficiency improvement would save 18 million barrels of oil equivalent.

Middle Eastern power plants typically use chillers to improve gas turbine performance. Chillers effectively cool the gas turbine inlet to allow it to generate additional mass flow. However, they are only available 6 hours a day because they require 16 to 18 hours to chill water. The Turbophase solution is available 24 hours a day. It uses a reciprocating gas engine to drive a multi-stage intercooled centrifugal air compressor and then uses the waste heat from the reciprocating gas engine to heat the compressed air to gas turbine compressor discharge temperature, generating that air between 30 and 40 percent more efficiently than the turbine can generate its own air. The air is injected into one or more of the existing ports, typically about 5 percent additional air, which results in 10 percent more turbine power and generate 6 times more power when compared to chillers.

The Challenge For Gas Turbines

Gas Turbines draw ambient air into their axial flow compressor, increasing the temperature and pressure of the air. The air then flows into the combustor where fuel is added proportionate to the amount of air mass flow and the mixture is ignited. This high-energy gas now expands through the turbine stages, creating mechanical torque to drive the gas turbine’s compressor and the net torque drives the generator producing electrical power.

Turbophase restores the mass flow that is naturally missing by injecting air into the compressor discharge. The gas turbine control system reacts naturally and adds a proportionate amount of fuel to account for the increase air mass flow, resulting in constant combustion and turbine inlet temperatures. The increased mass flow through the turbine section increases the mechanical torque to the compressor and generator.

How Turbophase Meets the Challenge

Turbophase is a packaged system with a reciprocating engine driving a multi-stage, intercooled centrifugal air compressor. Air is drawn into system to ventilate the system and provide air to the compressor. The compressor air filtration system mirrors the air quality of the gas turbine and then is compressed by the first stage of the air compressor and then cooled. The inter-cooled process is repeated through four or five stages, depending on the desired pressure, resulting in less power required per pound of air compressed compared to the axial compressor in a gas turbine. After the final stage of compression, the compressed air flows directly into the recuperator, a heat exchanger which transfers the waste heat of the reciprocating engine exhaust into the compressed air. The Turbophase module can generate air at gas turbine compressor discharge pressure and temperature 30 to 40% more efficiently than the gas turbine itself.

How Turbophase Modules are Installed at a Power Plant

A Turbophase system can have several modules and each module produces a certain mass flow of pressurized hot air. Each module is factory acceptance tested to ensure quality including correct air pressure and temperature prior to shipment to the power plant site. Depending on the size of the gas turbine, and the requirements of the power plant, a Turbophase system may have 1 module or more than 10 modules. Each module is approximately 32 feet long by 8 feet wide by 18 feet tall at its highest point. A typical Turbophase installation requires no unplanned outage at the plant. 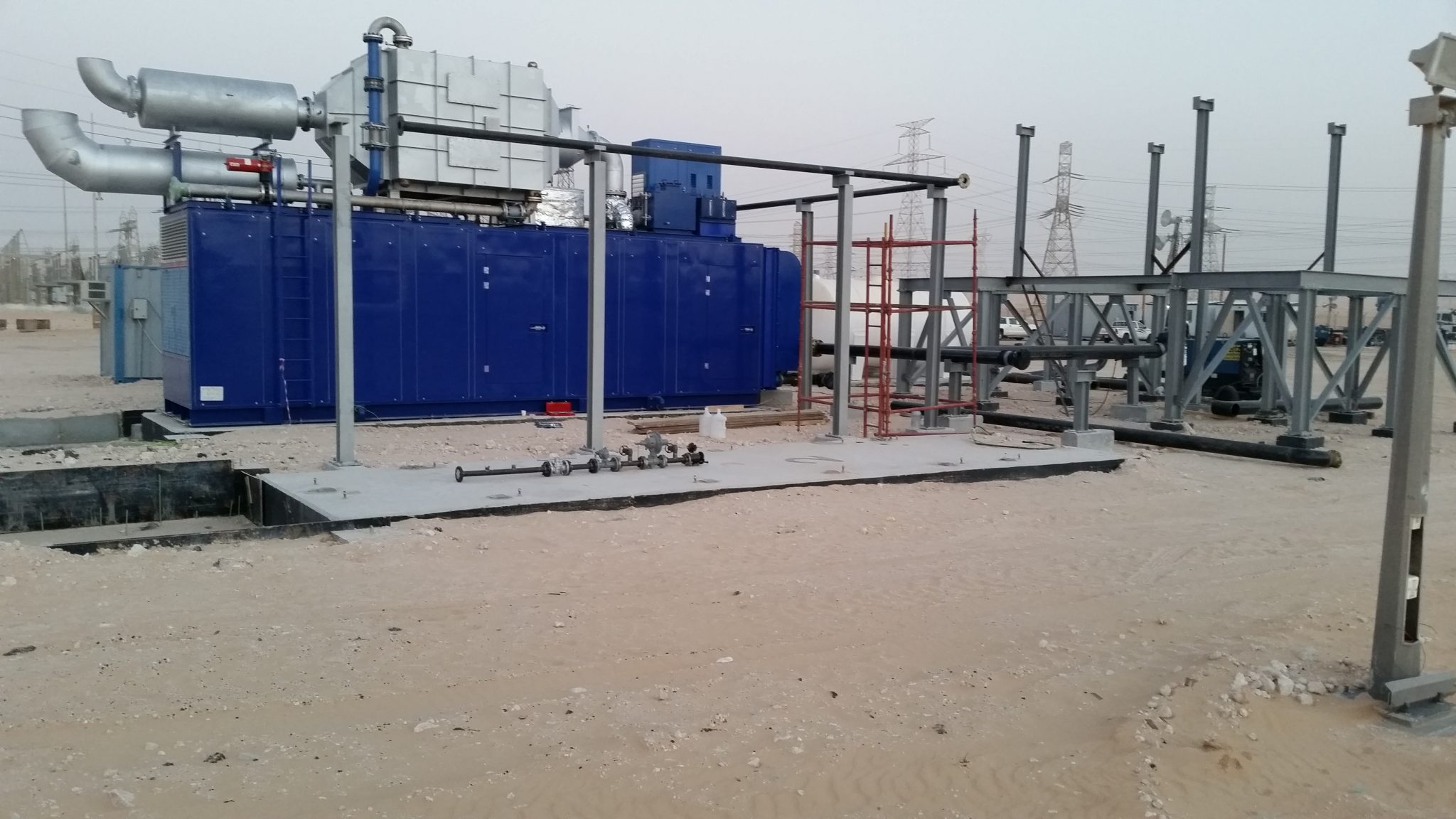 To date, plant operators in the Kingdom have used two expensive options to increase GT power production. One option is a chiller to cycle cold water from a cold tank to a hot tank through the turbine’s inlet to boost power production. However, the chillers draw power from the turbine to refrigerate the water for 16 to 18 hours a day.

Therefore, the chiller can only run 6 hours a day while parasitically reducing electricity output from the turbine. Another option is novel aeroderivative gas turbine technology that can be quickly dispatched to meet peak demand with traditional CCGT serving baseload. However, installing new aeroderivative gas turbines is expensive and these turbines also have thermal inefficiencies when the ambient air temperature rises. The Turbophase module is a less expensive investment than a new peaking gas turbine. It can also be deployed much faster than a peaking plant because it can be added to an existing plant. Therefore, there is no need for design, permitting, commissioning, and interconnection to the grid as there would be with a new plant. The Turbophase module is also a superior substitute to a chiller, as it is available 24 hours a day to boost air flow to the CCGT. It is also a more flexible solution because it can integrate with any GT in a CCGT plant whereas a chiller must be sized and fixed to a specific GT.

In the Middle East, maintenance labor is expensive. One way to reduce maintenance cost is to extend operating intervals and reduce planned downtime. Turbophase extends equipment lifetime and reliability by offering the option to reduce GT firing temperature while maintaining output constant. In the U.S., Turbophase has helped a customer add 8,000 hours, or one year, to their operating interval from OEM recommended 24,000-hour interval. In other words, the customer extended their operating interval from 3 years to 4 years. When the lost revenue associated with maintenance downtime is considered, the customer avoided losing $5 million in electricity sales revenue. 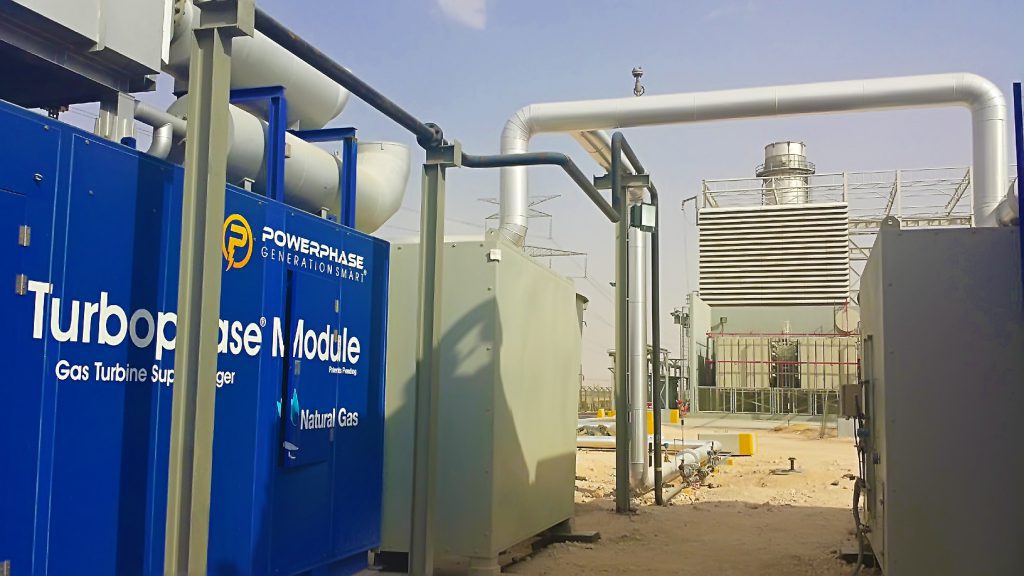 Powerphase demonstrated two Turbophase modules on a GE 74A GT at the SEC Faras power plant in 2015. The technology proved to be flexible, highly available, and that it could improve GT heat rate performance by 5% during Saudi Arabian summers. The project kicked off on April 22, 2015, which only gave the engineers three months to deliver, integrate, and commission the Turbophase modules before summer began. Due to the short time period available, Powerphase adjusted its auxiliary power supply source.

After the first injection, the Turbophase modules were hot commissioned by performing injection tests at varying inlet temperatures. On July 28 and October 2, performance tests were administered. The tests were conducted by Powerphase personnel operating the Turbophase system and plant personnel operating the GT. SEC plant management and SEC East region technical staff witnessed the tests. The Turbophase system achieved its stated output and heat rate targets of 4.5 MW per Turbophase module and 5% heat rate improvement for a full installation. These values are based on the measured performance corrected for firing temperature and extrapolated to a full installation. A full installation of seven Turbophase per GT at Faras Power Plant would generate 31.5 MW and a 5% heat rate improvement to the entire gas turbine. Additionally, the system demonstrated as high as 99.3 percent availability in ambient conditions up to 131°F (55°C). The fuel efficiency improvement was demonstrated at both baseload and part-load operating conditions. 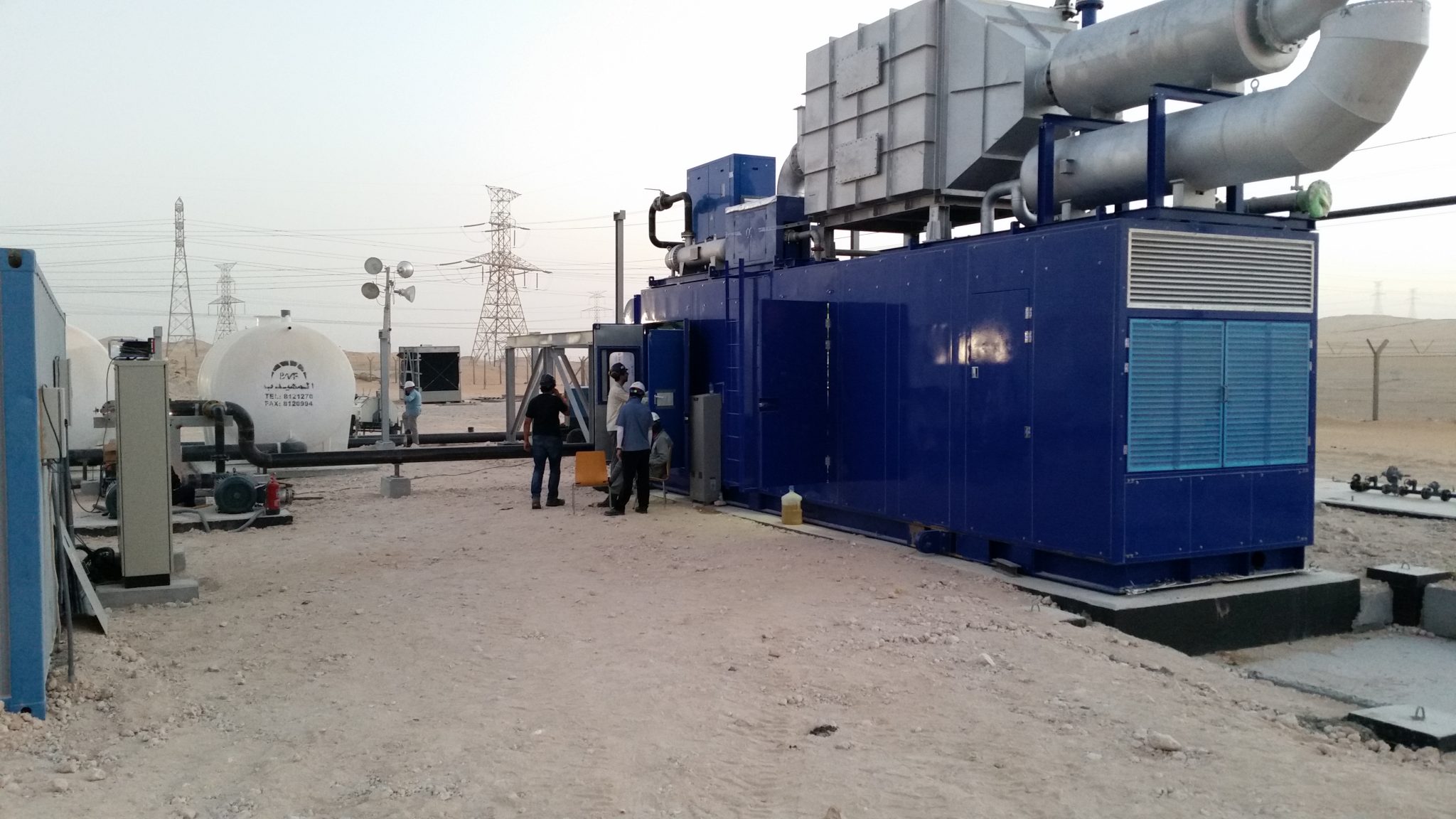 Following on the successful demonstration of Turbophase modules on the GT, SEC could expect a standard installation of five to seven Turbophase modules to provide significant benefits. At the as-found conditions of the GT, each Turbophase module adds 4.25 MW at 8,650 BTU/kWh to the GT, for a total of 8.5 MW at 8,100 heat rate. Performance calculations show the heat rate closer to 8,000 BTU/kWh. By extrapolating the Turbophase output from the current firing temperature of 2,370F to the design point of 2,420F, the output increases to 4.5 MW at 7,600 BTU/kWh heat rate.